On Sunday we took a daytrip to some cenotes just outside of Merida. Cenotes are
very unique phenomena, found in Yucatan. There are over 3000 cenotes, which are
basically giant holes in the ground, which are filled up with water over time. They are
absolutely stunning, and a real piece of natural paradise here on earth. So, we went
to explore! 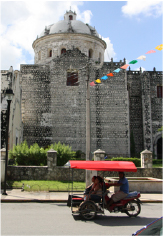 We hired a car for the day and headed south out of Merida. We grabbed some
breakfast in Uman, a city just outside of Merida, and we visited the church there. Our
first stop was the hacienda Yaxcopoil, an enormous site from the 17th century. The
hacienda is beautiful and definitely worth a visit, however due to the size, we decided
not to enter, so we could spend more time at the cenotes. Definitely somewhere to
visit another day! 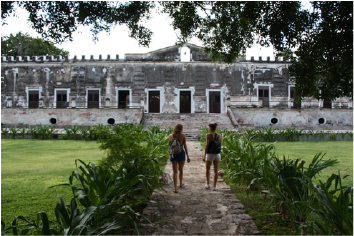 About thirteen kilometres south of the hacienda, we arrived at our first Cenote,
X’batun. There are two cenotes on this site with a combined entrance fee of 80
pesos. After paying, we drove a further two kilometres along a bumpy dirt road and
arrived at the cenote. At this time, we were really glad we took out insurance on our
rental car! The cenotes are well preserved and the staff try to maintain the beauty by
forbidding sunscreen, mosquito spray, or any other chemicals, and all visitors must
shower before they are allowed allowed to dive in. The cenote was amazing, with
clear blue water, vibrant green plants and trees hanging from the rock wall. It’s true
what they say, “a picture tells a thousand words”, so here are a few shots from the
first cenote:

The second cenote was another kilometre along the dirt road. Unlike the last one, this was inside a cave and much cooler in temperature. The water was so pure and still that we could see the bottom of the cave at all times. It was really magical! To put this into
context... before we entered, the lady on reception told us that the cenotes have a depth up to thirty meters! 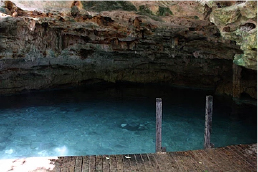 We drove further to a little city, Muna, to grab dinner. It was quite late and most
places were already closed, but we did manage to find a typically Mexican place for a
few tacos before calling it a day and heading back north to Merida.

A great day out with great people!

Mexican And Yucatecan Flavours In Merida: Eat Like A Local

If you think Mexican food starts and ends with tacos (and tequila but that’s more of a liquid dish!), you better make your way over here!

The Best Bars in Merida

It’s no secret that Merida has amazing nightlife - from modern bars to traditional cantinas to Irish Pubs (yes, we have them here too)...

Why Merida Is The Perfect Destination For A Single Female Traveller

Did you ever think a Mexican city would be considered one of the safest places in the world? Did your mum come up with elaborate plots to...