We are travelers too!

La Casita was born in 2019 when it's founder José Martínez returned from Europe to his home country México. During his 6 years throughout Europe in countries such as Estonia, Spain, Austria and Scotland he worked in the Hospitality and Food industry, where hostels and street food were his greatest passions.
José also faced the challenges of moving to a new country, with a new culture and a new language. He immersed himself in languages, firstly studying Italian in Italy, and later studying German in Austria.
On his return to México, he looked for ways to put his experiences to use in order to create a place for travelers and expats to have a place which was about more than learning Spanish, a place where an unforgettable experience is offered, at a very affordable cost and without compromising quality. 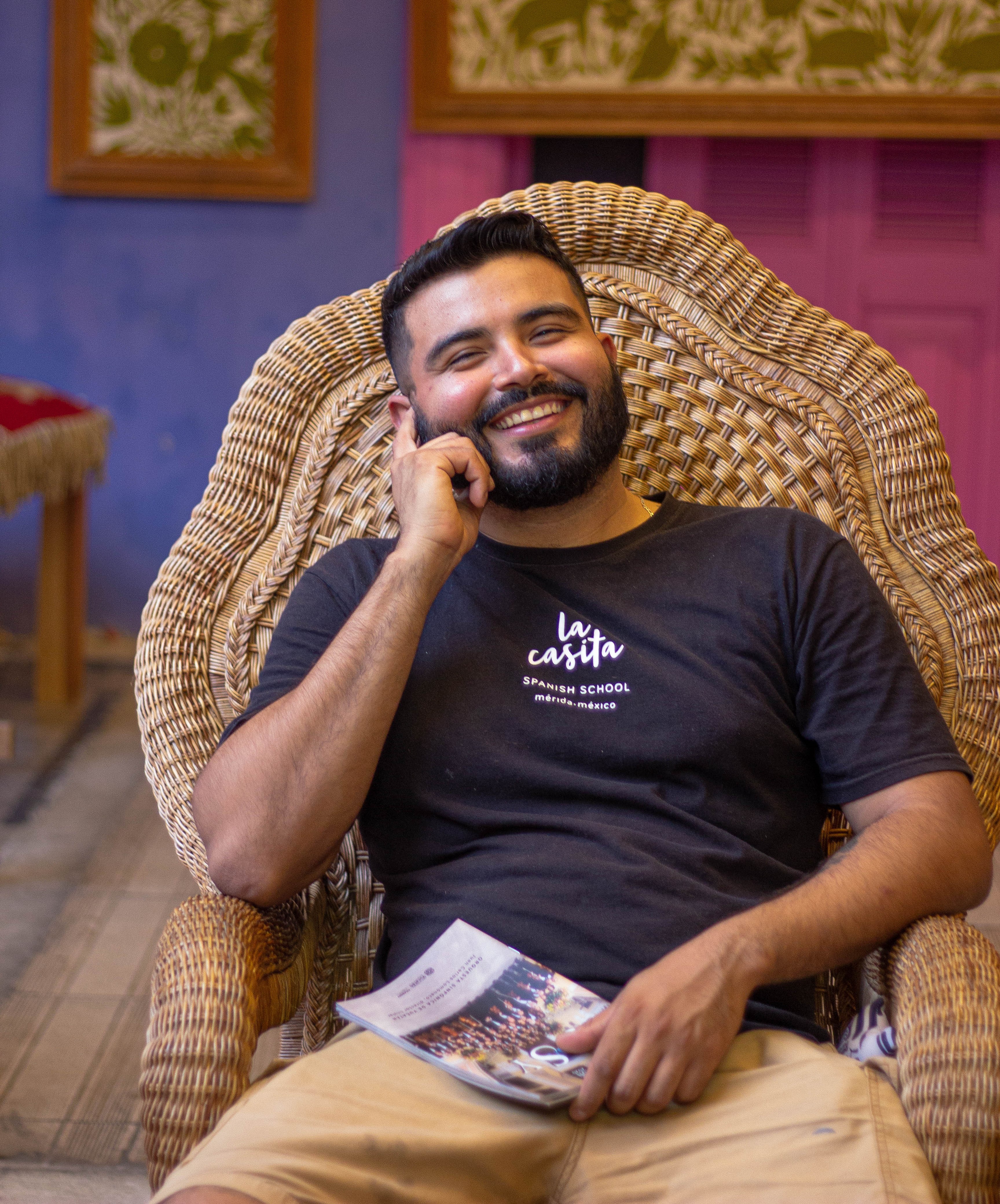 We believe in the power of community. So we created an immersive learning community for travellers and backpackers united in their desire to learn Spanish.
Our classes are interactive. You will learn through games, puzzles, and genuine interactions - not copying lines from a textbook.
But more than that, we offer a place where you can meet and speak with locals, learn about Mexican culture and life, and become part of the vibrant community here in Mérida.
Our goal is that by the time you leave us, you will not only speak Spanish but have shared your time here with a circle of friends and like-minded people.
Watch the video to hear about one of our student's experiences.

La Casita is the PERFECT place to go to learn Spanish. I took the 4 week course. When I started, I could only understand the very basics. After 4 weeks, I can now understand so much more, and can have long conversations with locals. Getting around is so much easier now, and I’m so glad I chose this place to start my Spanish learning. The teachers and other staff were outstanding. Learning a new language isn’t easy, so it was very helpful to have teachers who are positive and encouraging. Being immersed in the culture and forced to speak daily was an added benefit. I stayed in the guesthouse, which is just a few blocks from the school. After a day of practicing Spanish, I had the afternoons to relax at the pool at the house, chill in a hammock, or go to an event that La Casita was hosting. There was always something to do on the weekends, from cenotes, to the beach, to the many things happening in the parks of Mérida. There is always music and dancing. I felt very much at home. I really can’t recommend La Casita enough. I hope to come back soon! Nos vemos!

Such a good vibe from Jose (the owner of the school) and the school itself looked really pretty.Now I trust my instinct more because of the experiences I had with them!
Teachers are really patient with you and always know what exercises can improve your Spanish skill. More importantly, very funny and interesting! I only knew very little Spanish before but after studying here for 6 weeks, slowly but I can express my feelings and understand what's been said. I can talk with locals and make friends easily . 120% recommended to visit here and learn Spanish first if you are planning to travel around Mexico or all around Latin america because first you'll make many friends at school and they can give you great advises of what to do and second you'll make more friends with locals while traveling if you can speak their language.
Thank you so much for the great time :))))))!!!

I loved my time at La Casita! so many great memories. José is an amazing host and Lizette is an amazing teacher. The accomodation was super comfortable. Besides learning Spanish i also learned how to make some mexican dishes like ceviche and guacamole. We also did many excursions. For sure i will return for a second course.

The most immersive and interactive way to learn Spanish! Interesting lessons, the best teachers, great location - with plenty of fun events to practice your Spanish, integrate with friendly locals and meet new people at. The language exchange is one of my favourites!

One of the best experience of my life!
I have been studied here for 1 month, before to go I was sceptical but from the first moment that I was there I felt amazing! Merida is a wonderful and alive city, la casita is the perfect place to find good friends and learn Spanish having fun! All the staff is really prepared especially the teacher. It was difficult to leave at the end. I Highly recommend to anybody that want to learn Spanish and have a nice time with other people from all over the world

I had the best time at La Casita. José gives the school his all, and really wants to make sure that everyone is happy and enjoying themselves. The classes are intensive but lots of fun, and it was a great chance to learn the basics for getting around and making conversation, for a total beginner like me! The school is only a few blocks away from the accommodation where you can stay, and both are in the center and close to some nice cafés and cantinas. Thanks so much for everything guys!

I stayed three weeks at La Casita and I had an amazing time. There is a great atmosphere in the school, which will make you feel right at home. Jose and the staff were very helpful and accessible. The after school activities were perfect to get to know my fellow students and to get to know the city. Highly recommended!

Great school with excellent staff. I didn’t speak a word of Spanish before arriving here and now I have much more confidence to continue travelling with the skills I have learned. The classes are small and focussed, with a chilled vibe and there are many after school activities offered such as language exchanges, walking tours, movie nights and general social events. José was very helpful and worked hard to make my experience a good one! Cheap prices and great location! Highly recommended!

Was a good choice choosing this school... Excellent teachers, excellent city and every night with some meetups with all the students, staff and locals.. highly recommended... Thank you all ❤️

Come as a student, leave as a friend!